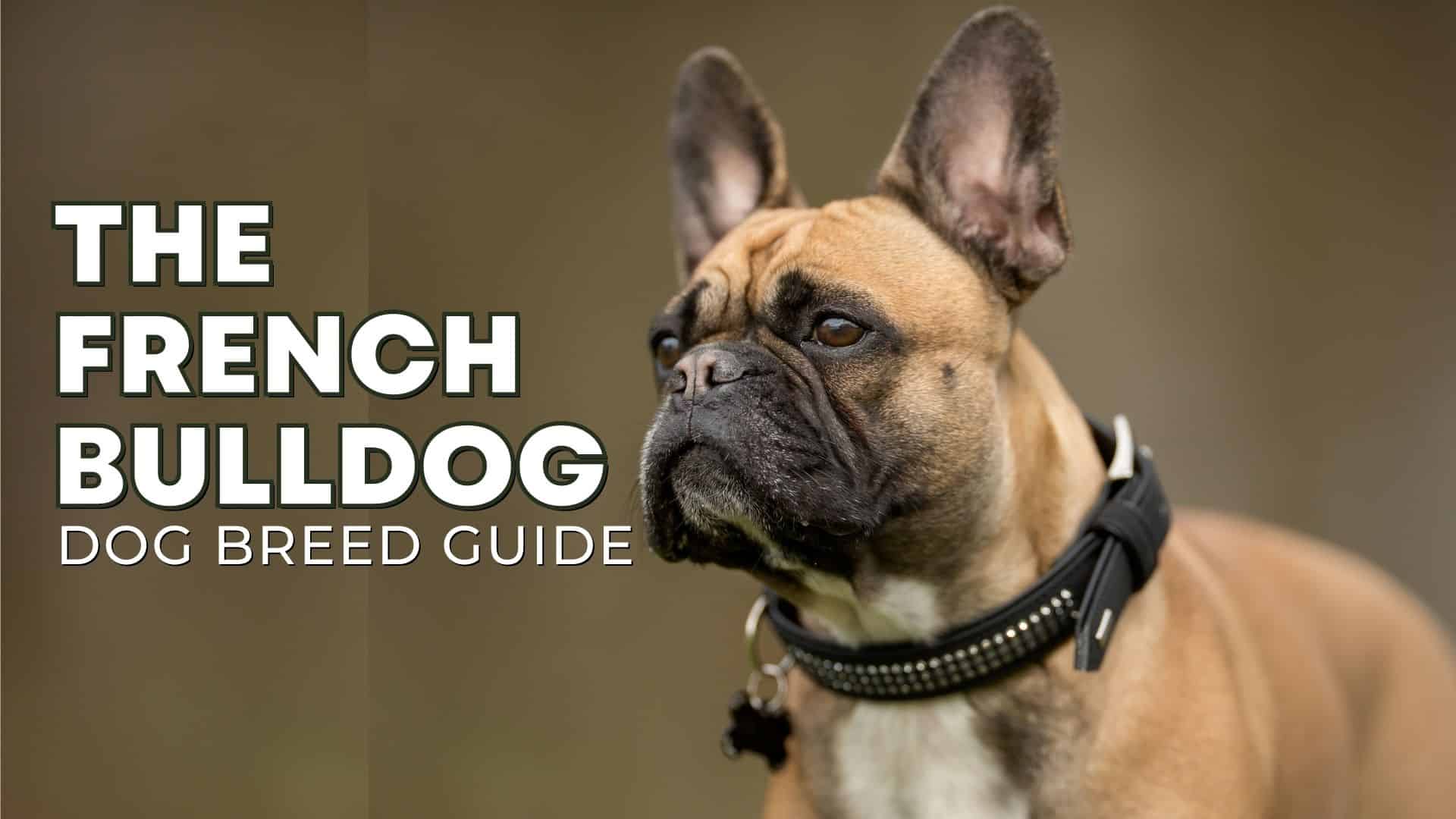 The French Bulldog traces its roots back to England where the breed was created to be a smaller version of the Bulldog. In the mid-1800s, the toy Bulldog was highly favored by Nottingham’s lacemakers. At the height of England’s Industrial Revolution, many lace makers immigrated to France and brought their toy Bulldogs with them. In France, these dogs were called “ Bouledogue Français”.

Through the years, the toy Bulldogs were crossed with other breeds, which eventually resulted in their prominent bat ears.

As the popularity of the French Bulldog spread through Europe, Americans soon discovered these charming little bulldogs with adorable bat ears. Frenchies were officially recognized by The American Kennel Club (AKC) in 1898.

Except for their trademark bat ears, the French Bulldog appears like a miniature version of a Bulldog. The breed ranks fourth in AKCs 2020 Most Popular Dog Breeds. In this complete guide, we explore the breed’s history, appearance, personality, and more. Scroll down to find out why the French Bulldog is one of America’s favorite pups! 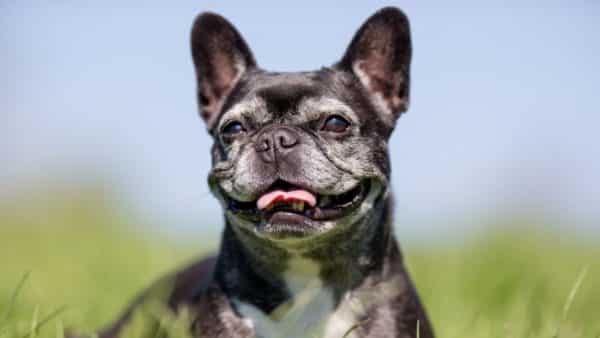 The French Bulldog has a medium or small structure but they are compact, muscular, and heavy boned. Their alert and curious expression give them the appearance of intelligence and interest. The head is large and square with very distinct bat ears. Heavy wrinkles of skin are found above its extremely short nose.

The short hair coat of Frenchies shed minimally. Hair coat colors that are considered acceptable by the AKC include white, cream, fawn, or any combinations of the foregoing. Markings and patterns include brindle, piebald, black masks, black shadings, and white markings. 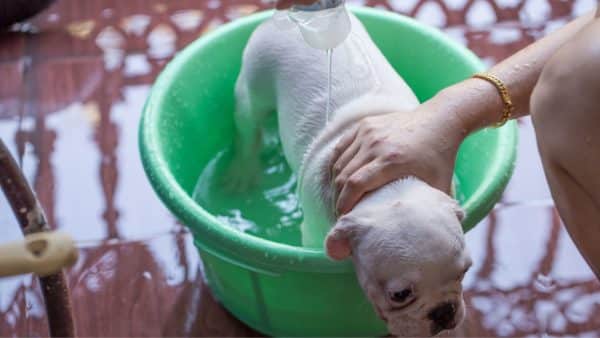 Frenchie’s are minimal shedders. Their short hair coat will only need a weekly brushing using a brush with medium bristles. A fur remover can also be used to get rid of loose hair and keep the coat clean and shiny. A Frenchie doesn’t need frequent baths, and when they do, a hypoallergenic shampoo should be used since these dogs are prone to allergies.

A Frenchie’s facial folds can be a haven for bacteria and fungi thus, it should be kept clean and dry. Use hypoallergenic wipes to clean the folds. Regular nail trimming should also be done as overgrown nails can be painful and uncomfortable. Be sure to use a nail trimmer that will not cause stress to the dog.

Frenchies are also prone to tear stains which is particularly noticeable in dogs with light-colored hair coats. A vet-approved tear stain remover or wipes can keep their face clean and fresh.

Though they are not prone to ear problems, the ears of Frenchies should be checked regularly for any abnormal discharge or distinct odor. The outer ear canal can be cleaned using a vet-approved ear cleansing solution.

Toothbrushing should be introduced as early as possible. A regular dental regimen coupled with dental checks at the vet can help prevent periodontal disease. There are also dental chews that can help prevent the build-up of plaque and tartar which are important predisposing factors of tooth and gum problems.

Frenchies are easy-going and are always on the lookout for opportunities to play. They have a relaxed attitude and love spending hours just lazing around. These dogs love being with their humans. They won’t do well being left alone for long periods and can develop separation anxiety.

They can thrive in a multi-pet household and can get along well with children. Frenchies can be territorial and possessive of their humans, especially when there are other dogs around. They possess a strong territorial instinct and are highly protective of their humans. They will go to extra lengths to defend both.

With their stubborn and mischievous streak, Frenchies need a firm and consistent alpha leader. They rarely bark, and when they do, it’s often to announce the approach of strangers. 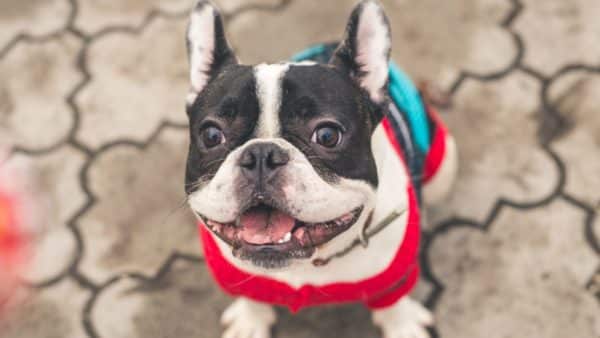 Like any dog breed, Frenchies need early socialization and puppy training classes. During socialization, they should be exposed to various people, animals, sounds, and scents, so they will be able to easily adapt when encountering new situations later in life.

The period of socialization should be filled with positive experiences for the puppy. Puppy training classes can also help with the process of socialization, and promoting good behavior.

Frenchies can be stubborn thus, they will need basic training regimens, such as obedience training, housetraining, crate training, and leash training. Being people-pleasers, they are easy to train, more so when they know their favorite treats are up for the taking.

French Bulldogs can do well in apartment living as they don’t need a lot of space. Their exercise needs can be met with a couple of 10-15 minute walks every day. Being a brachycephalic (flat-nosed) breed, Frenchies cannot tolerate extreme temperatures.

They can easily develop heat stress. They should be in surroundings that are cool and comfortable. An air-conditioned environment may be necessary on a hot day.

French Bulldogs are prone to breathing problems. They have poor tolerance to humid or hot weather. Because of the structure of their heads, they cannot swim. This is one important reason why Frenchies should never be left unattended near a bathtub, pool, lake or any body of water.

Like any flat-faced canine breed, Frenchies are more sensitive to the effects of anesthesia. Eye problems, such as cherry eye, entropion, or cataracts, are quite common among these dogs.

They can also develop skin allergies and autoimmune skin conditions. Here is a list of breed-related health concerns. Additionally, you can read the Official Breed Club Health Statement.

Frenchies are prone to piling on the pounds, so it’s important to keep an eye on their calorie intake. Overweight or obese Frenchies have higher risks of developing weight-related health issues, some of which can adversely affect their longevity and quality of life.

Their daily nutritional needs can be met adequately with premium-quality dog food that is appropriate for their life stage (puppy, adult, or senior). Alpha Paw’s Vitality dog food is a great option.  Treats should be given in moderation because they are important sources of excess calories.

Calories from treats should not exceed 10% of a Frenchie’s daily calorie consumption. Fatty foods and cooked bones should not be given. If you have concerns about your pet’s appetite, weight, or diet, consult with your vet. 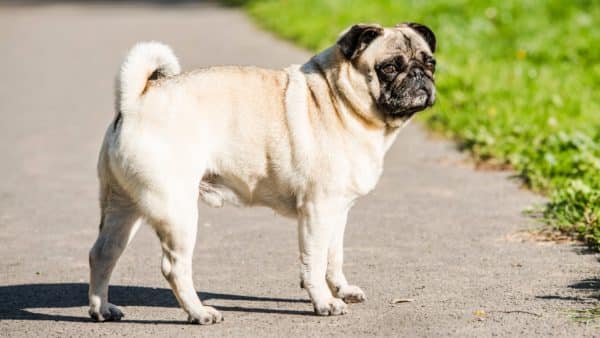 How Much Do French Bulldogs Cost?

The price of a French Bulldog will depend on several factors including the location, breed lines, color, and other factors that conform to the standard of the breed. Purebred Frenchies typically cost between $1500-$3,000.

The price can go up as high as $5,500-$10,000 for puppies with outstanding breeding lines. Always transact with a reputable breeder and make sure that both parents of a French Bulldog puppy have the following documents:

Tips for Adopting and Raising a French Bulldog

Adopting a French Bulldog will cost much less and usually ranges from $350-$550. The adoption fee covers registrations and vaccinations. French Bulldogs make excellent pets for any household.

They love spending time with their humans. These affectionate dogs are full of fun and love for humans and other animals. Their ability to adapt is remarkable. These playful little charmers can thrive well in limited space and need less exercise than the more active breeds.

With proper training and adequate physical and mental stimulation, a Frenchie will certainly make a great addition to any family.

Q: Are French Bulldogs aggressive?
A: Frenchies have a reputation for being sweet and charming, but some can display aggressive behaviors such as growing and/or baring of teeth if they are not properly socialized at an early age.

Q: Why do French Bulldogs stink?
A: Bacterial infection in their facial folds is an important cause of undesirable odors in Frenchies. Cleaning the folds and making sure they’re free from moisture can help prevent the problem. Frenchies are also prone to gassiness or flatulence.

Q: How often should Frenchies be bathed?
A: Ideally, Frenchies should be bathed once every 1-2 months or as needed.

Q: Are Frenchies lapdogs?
A: French Bulldogs are cuddly, affectionate, and friendly. These are qualities that make them excellent lap dogs.