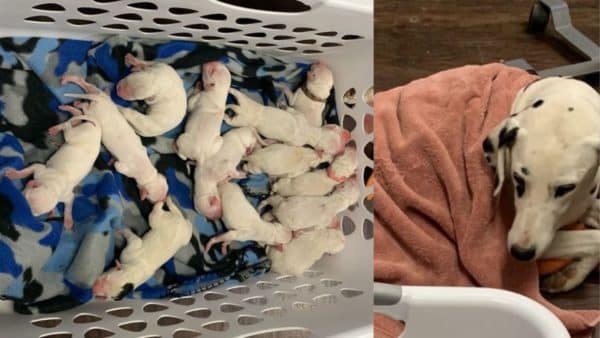 We have all seen and love the quintessential 101 Dalmatians. Our story today is much like the movie but with 16 puppies instead. And something tells us that their new mom is not complaining.

Luna, a Dalmatian from Texas, became a mom to 16 perfect puppies after a long labor with some extra help from her humans. For some perspective, the normal Dalmatian will have a litter size close to seven, so Luna is a trooper.

One of the main elements of surprise is that before giving birth no one was sure how many puppies Luna would be having. Brittni Turner, the veterinarian that helped deliver the puppies, was not quite able to get an accurate count by the end of Luna’s third trimester.

“When Luna was in her last week of pregnancy, we took a radiograph at the clinic, which is pretty standard when dogs are pregnant to know if you can count how many [pups] are in there,” Turner explained. “It gives you an idea of what to expect for the delivery. When we took her X-ray, we said, ‘I don’t know, that looks like a lot of puppies!’ We couldn’t count them, there were too many … We just knew that there was going to be a good amount [of puppies delivered].”

A Labor Of Love

The evening that Luna went into labor, things began smoothly. She was able to deliver the first five of her puppies at home without any complications. That said, they knew she had more puppies inside of her, but her laboring had halted.

“She delivered five puppies on her own, and then her labor stopped around 6:30 or 7 a.m.,” Turner said. “[Luna’s owner] texted me on my work phone and I told her to go ahead and come in, just because it was not the normal situation for a large breed dog. They normally don’t have a lot of complications [in labor].”

As soon as Luna arrived, Turner and her staff started to take a look. They soon found that her sixth puppy had ended up positioned wrong to be born naturally.

“I was able to feel a leg in the birth canal, but just the leg,” Turner shared with Newsweek. “We took an X-ray and saw that the puppy that was supposed to be coming in the birth canal was breached with its head turned to the side.”

As is often true with humans in these circumstances, Turner and her staff moved forward with a caesarian section on Luna. It would mean that she and her puppies had the best chance at a healthy life. 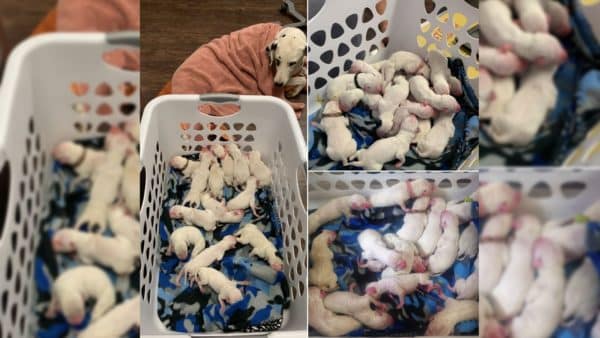 16 Puppies Welcomed To The World

Oh, but there were more.

“I then said, ‘I know there’s at least two more.’ Then I would say, ‘Oh, there’s definitely one more. No, there’s two more,” Turned continued. “We kept miscounting the puppies!”

It quickly became a communal effort as the number of puppies continued to climb.

“The owner was back there helping, our receptionist, our technicians. We pretty much had everyone back there helping. Finally, we counted that there were 16 puppies, and five of those were born naturally, which left 11 that we delivered by C-section.”

Luna and all of her puppies survived labor without any lingering issues. And Turner was able to confirm that she and her puppies are still doing well.

“They [all] went home that day,” she said. “Luna was being a really attentive mother already, wanting to be with the puppies. She’s doing really well, and the puppies are doing great … It was a blip of chaos but it was good in the end.”

While Luna may have had a record-setting litter, she does not hold the world record. A Dalmatian from Australia named Melody gave birth to her litter in 2019. That litter came with a whopping 19 puppies, according to the BBC.