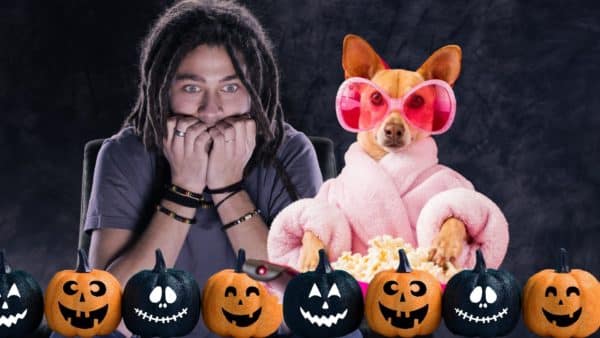 Halloween is here and dog lovers, we’ve got a list of our favorite scary movies to watch with your canine companion. Pop some popcorn, curl up on the couch, have your four-legged best friend join you (use a dog ramp if you need to), and enjoy one (or all of these) Halloween dog films! We guarantee you’ll have a howling good time watching these blockbusters with your furry friends!

We’re not going to lie, there were many excellent choices for scary Halloween movies featuring dogs. From live-action to anime, it was tough to choose which Halloween dog films to add to this list, but we did it – below are the best Halloween dog movies ranked from least scary to the most terrifying.

What’s Halloween without Charlie Brown and Snoopy? This adorable 1960 movie classic will have dog lovers falling in love all over again with Snoopy and the gang. It follows the Peanut crew as they search for the elusive Great Pumpkin. Watch the trailer! Scary movie it’s not, but every holiday needs to have Charlie Brown and his gang in it!

In this classic Hanna-Barbera cartoon, Scooby-Doo, his sidekick Shaggy, Velma, Daphe, and Fred AKA Mystery, Inc., take on a Halloween mystery. They’re off to a spooky island to investigate paranormal activities and that means lots of jump scares, scooby snacks, and laugher.

We know the gang will eventually solve the mystery (because they always do), but it’s a ton of fun to watch the adventures they get themselves into as they work to solve the case! Watch the trailer above.

8. “The Dog Who Saved Halloween”

A family dog comes to the rescue when his family moves next door to a haunted house! It’s a classic story with a talking dog who seems to be smarter than his humans. Zeus and his family of dog lovers take matters into their own hands and paws to uncover the mystery brewing next door. Watch the trailer above.

What’s a movie list without a Disney film in it? This family movie feature dogs who can talk, and remind us that they’re just like our two-legged human kids! In Spooky Buddies, golden retriever puppy siblings work to save themselves from the evil Warwick the Warlock.

Needless to say, they go on an incredible journey to keep a paw ahead of the warlock. Fair warning for dog lovers who are looking for a scary movie – Spooky Buddies is not scary. However, it is an entertaining family movie that’ll have you howling with laugher. Watch the trailer above.

Some Halloween dog films aim to do nothing but scare you, while other Halloween movies aim to do more. That’s just what  Frankenweenie does. Victor Frankenstein, a boy in a small town, is devasted when his dog, Sparky, dies. So, like any genius kid (in the movies), he sets out to recreate his favorite canine friend.

Needless to say, the dog lover can’t keep his secret life hidden for long. When other kids in town sniff out what’s happened to Sparky, all hell breaks loose! Without a doubt, This Tim Burton film will tug at your heartstrings and give you a few scares! Watch the trailer above.

It’s a Halloween movie that’s also a comedy. However, don’t expect it to be like a Christmas movie. A genetically engineered Tibetan Mastiff named Max escapes from a lab that has been experimenting on him. Once out, the family dog appears to be normal when people find him. However, underneath Max’s lovable exterior is a genetically modified killer.

He truly is humans’  best friend until the murderous rage takes over and turns him into a killer dog. Sadly, expect this dog’s journey to have a sad ending. However, like many Halloween movies, Max’s legacy lives on. Watch the trailer above.

One of the best dog movies of all time, Isle of Dogs is a Halloween movie that isn’t a horror movie in the traditional sense. It belongs on this list because Isle of the Dogs is a psychological profile of how humans can turn into monsters when unforeseen and misunderstood situations take place. Now, that is scary!

The stop animation movie centers around a boy who goes on a journey to find his beloved four-legged best friend after it vanishes. A deadly outbreak of canine flu takes Japan by a chokehold leading to the banishment of all canines from the island. The determined young boy refuses to abandon his dog and stops at nothing to find him. Watch the trailer above.

One of the best Halloween dog movies stars A-list actor Will Smith. I am Legend throws several spine-tingling situations together. Set in a post-apocalyptic world riddled with human mutants who’ve turned into vampire-like creatures called Darkseekers, they have only one hero to save them, and time is running out.

Will Smith portrays a scientist named Robert who attempts to find a cure to save humankind. Along the way,  his loyal canine companion Sam helps to fight off the Darkseekers. This is one of those Halloween dog films that pull every emotion you have. If you are a true dog lover, settle down with a box of tissues. You’ll need it. Watch the trailer above.

Can you imagine your family being hounded by a pack of vicious wild dogs? That’s what The Pack is all about. It’s one of the best Halloween dog movies to watch with your four-legged best buddy. While it may have all the campiness of scary movies, it will keep you on the edge of your seat! Watch the trailer above.

Perhaps the definitive Halloween dog movie and the father of all dog horror films is Cujo. An iconic horror movie based on a book by the father of horror, Stephen King.  This scary dog movie will leave you chilled to the bone.

A lovable St Bernard is bitten by a rabid bat and turns into the stuff of nightmares. From friendly family dog to vicious killer, humans’ best friend becomes their worst enemy. The bloodbath and the horror will keep you up at night so watch it during the day! Catch a glimpse of the horror movie in the trailer above.

Whether you watch all these Halloween dog movies or not, be sure to keep your pet safe during the festivities!